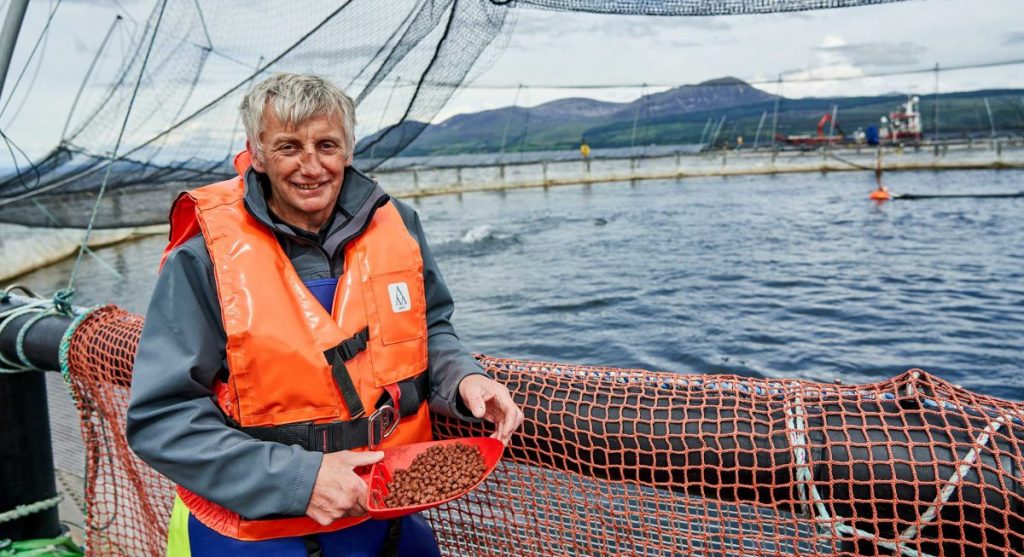 The company has operated salmon farms at nearby Carradale for a decade and looks to expand the socio-economic benefits realised in the region, as well as growing additional premium seafood for expanding domestic and international markets.

“After identifying North Kilbrannan as a potential site for growing salmon, we researched the area to see what the potential effects could be,” explains Yvonne Booth, Mowi’s environmental analyst.

The Scottish Environment Protection Agency (SEPA) has provided North Kilbrannan an environment licence, after assessing the potential for negative effects. Analysis has included potential impacts to the seabed, the water column, local fish, and scenery of the area.

A Scottish Government report released in 2018 recommended aquaculture companies look to high-energy locations (e.g. deep water, exposed areas, strong currents) to grow production in a sustainable way. Mowi is a leader in farming high-energy locations that present increasingly challenging and beneficial sea conditions. For over 50 years farming in Scotland, the company has continually adapted its business to meet these challenges, and will consider the experiences learned at its other high-energy locations – including Rum, Colonsay and North Carradale – into the development of the proposed Kilbrannan farm.

The Kilbrannan proposal will hold a maximum of 2475 tonnes of Atlantic salmon and create 7-10 direct jobs on site.

Mowi staff will access and service North Kilbrannan from Mowi’s shore base at the Carradale harbour, with facility improvements now in discussion.

“We are working with the harbour stakeholders and the community on a redevelopment project of the harbour which will benefit everyone,” says Shelley MacGillivray, data analyst at Mowi.

It is expected that the proposal will support more than 100 jobs within Scotland’s salmon aquaculture supply chain. According to a recently commissioned report, every pound of investment in the farm over a 20-year period will return four pounds to the Scottish economy.

Mowi Scotland Ltd employs 1500 people who raise salmon to RSPCA animal welfare standards. The company is the first in the UK to be awarded certification to the Aquaculture Stewardship Council’s salmon standard. In 2019, Mowi topped the Coller FAIRR Protein Index – a global sustainability ranking of the world’s largest protein producers.