We are providing sediment collected from the seabed at our Loch Leven site as well as staff and resources to assist in a study into the potential use of sea cucumbers as seabed recyclers in aquaculture in Scotland. Sea cucumbers come from the same family as sea urchins and are found naturally in Scotland’s coastal waters. 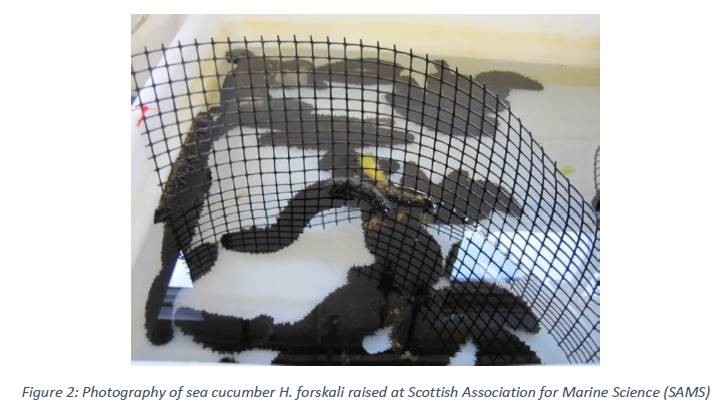 Bioremediation, a commonly used method on agricultural land, provides an environmentally friendly, and simple approach to restore degraded soil however the principle has not generally been examined in the marine environment.

The research project titled ‘Blue Remediation’, has been set up by a team of PhD students from the University of Strathclyde and Heriot-Watt University, with backing from the UK Seafood Innovation Fund and support from the Sustainable AquacultureInnovation Centre (SAIC).

This feasibility study into the ability of Scottish sea cucumber to recycle organic deposition below fish farms has the potential to improve understanding of whether a bioremediation method, in an operational application is viable.The quantity of wastes released from fish farms must be appropriately matched to the sea’s capacity to disperse and assimilate through natural biological processes which break down the wastes over time. If the study proves successful, then sea cucumbers could be used to accelerate the natural restoration of the seabed around fish farms. The project will help to determine the impact of integrating different species, any impact on wild cucumbers as well as monitoring the health and well-being of the sea cucumbers.

“We are excited to be part of this innovative research project with environmental sustainability at its core, the first of its kind in Scotland. Using sea cucumbers as nutrient recyclers and processors of particulate waste in fish farming is a practical example of an integrated multi-trophic aquaculture (IMTA) approach. This is where the waste products from one species, salmon in this instance, is acquired as a resource by another species – the sea cucumber.

“This is actually the second feasibility study we are involved with in the field of IMTA. Our new farm on the Isle of Scalpay is part of a project with local shellfish partners and the University of Stirling looking at the benefits of locating a shellfish farm adjacent to a salmon farm. This study, which involves different species of sea life, will examine ways to improve the productivity and environmental sustainability of marine aquaculture practices.”