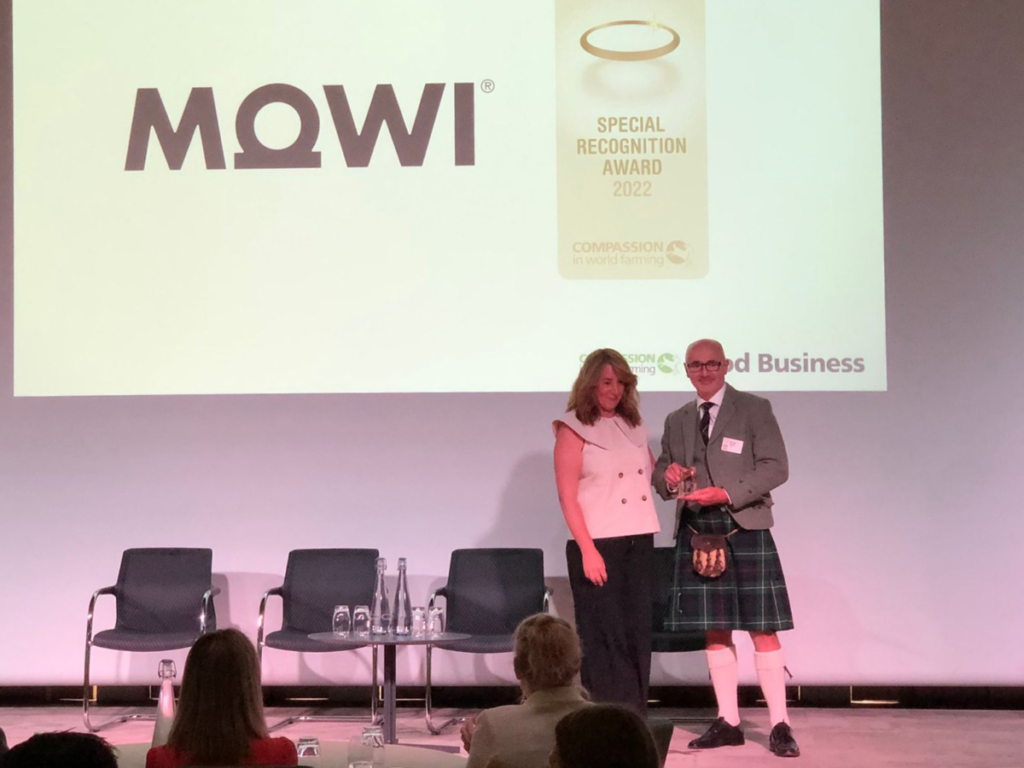 Mowi is proud to have been awarded a special recognition award at Compassion in World Farming (CIWF)’s Good Farm Animal Welfare Awards.

The awards showcase the work of food businesses around the world that make genuine and meaningful improvements to the lives of farmed animals and the sustainability of their supply chains.

Receiving the Special Recognition Award at the ceremony was Gordon Ritchie, Group Manager, Fish Health and Welfare, who said: “I was personally honoured to be Mowi’s representative at the awards and to receive the prestigious award on behalf of each and every one of our many employees who show dedication and passion for the welfare of our fish every day.

“This prestigious Special Recognition Award from Compassion in World Farming recognises our global standard and commitment on the humane slaughter of our fish using a bespoke percussive stunning system.

“This commitment applies to 100% of our ocean reared salmon from all of our seawater sites around the world, thereby matching CIWF’s flagship recommendation. As the largest producer of ocean-reared Atlantic salmon in the world, this commitment is set to benefit up to 100 million salmon per annum, covering all our sites in Norway, Scotland, Ireland, Faroe Islands, Canada and Chile.”

Improvements in fish welfare are falling behind those for terrestrial animals according to CIWF, mainly due to fish sentience being generally less recognised. However, the organisation said that Mowi “has demonstrated leadership in this area by becoming the first producer to make global welfare commitments on the rearing and slaughter of Atlantic salmon”.

By recognising the importance of fish sentience, Mowi has implemented a global policy on fish welfare and wellbeing, which includes several other important aspects of husbandry and rearing, in addition to our commitment on humane slaughter. Our current policy also covers topics such as medicine use, stocking densities and fish handling.

Gordon continued: “Our vision is to lead the Blue Revolution and unlock the potential of the ocean in a way that respects our planet. This drives everything we do at Mowi.

“With our commitments, and with this award, we want to showcase our standards and contribute towards more focus on fish welfare globally. We hope that by recognising Mowi’s commitments, this creates a positive ‘ripple effect’, and an example to other fishery and aquaculture operators.”