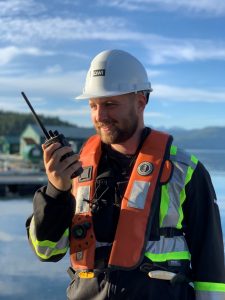 A new Radio Emergency Safety System has been implemented at Mowi Canada West, improving communications for the active farms within the Campbell River production area.

Operations Supervisor Paul Pattison, who spent 22 years as a site manager for Mowi, says the idea for the program originated from the Health & Safety Department and was approved by senior management in 2018. Quinsam Communications installed the system mid-July, which utilizes Motorola base and handheld units.

The development of the communication towers, testing, and purchasing of equipment were all part of the preparation of the project, which is a massive investment towards the safety and wellbeing of Mowi staff.

“Campbell River is the test site, and the system is tuned in as Quinsam Communications,” Pattison notes, adding it has been tested as far as Black Creek, and will be installed and tested as far north as Klemtu in the future. Site and field operations employees will have access.

“The radios have digital capabilities, but the most exciting addition is the integrated Personal Alert Safety System (PASS) which requires workers to hit a ‘check in’ button at pre-set intervals,” he says. “Failure to do so will result in an alert to other radios in the area that identifies the unchecked radio, and allows workers to know who has failed to respond and where they are. This could potentially be a lifesaving addition in the event of an emergency.”

Pattison says the goal is to have every working employee carrying a radio with direct contact to their peers, which will offer a dynamic and immediate response system to any emergency. The goal is to get the radio system into its own classification within the DATS program. 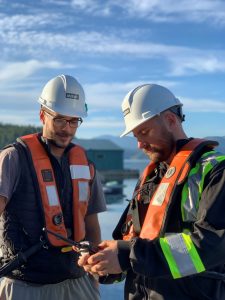 “The main learning curve is to have workers getting used to the new equipment and keeping it on them at all times,” he says. “Workers have been primarily trained on-site when they receive their radio.”

Pattison explains that anyone who has experience using a radio will have a simple time learning how to use the Radio Emergency Safety System. It will be a primary tool in both effective communication and emergency response – both critical components of Mowi’s safety system.

“Part of the training will be incorporating the system into hands-on emergency drills as this will expose opportunities and challenges,” he says. “The guidelines for the radios and the Emergency System will be added to our online training programs and will evolve as new information and opportunities are identified.

“I’d like to thank Dean Dobrinsky, Blaine Tremblay, and Dan Pattison for their hard work and efforts in our safety department, and for all the hours invested in this from proposal to final installation,” he adds. “It will be an absolute game changer for communication.”