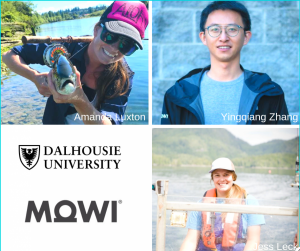 All three studied aquaculture at Dalhousie University Agricultural Campus in Truro, Nova Scotia, and they’re now working in Mowi’s Freshwater Department, having joined the company in 2012-13.

“It is certainly easier to work with classmates, especially since we get along well,” says Yingqiang, Interim Manager at FWF for the past three months. “I realize that being classmates and friends makes it easier to discuss issues or concerns related to work.”

Amanda, Assistant Manager at Big Tree Creek Hatchery, says it has been fun working with classmates.

“Jess and I learned a lot of the same things, being in the same classes, but when she moved here, she was Saltwater and I was Freshwater, so we didn’t have much in common workwise. Now, with both of us being in Freshwater, it’s been nice. If I have questions about brood I can ask Jess, and when she has questions about the hatchery and RAS, she can ask me. Ying and I still stay in contact, and when we need advice or help with things that come up, it’s nice being able to help each other out.”

At Big Tree Creek Hatchery, Amanda helps ensure that everything that happens at the hatchery from egg to smolt goes smoothly and that the fish are happy and healthy.

“The Freshwater Department focuses on fertilizing and hatching our best eggs and growing these fish into strong, big smolts for the sea sites,” she notes. “Freshwater and Saltwater Departments are night and day when it comes to their focuses, with one exception: Keeping our salmon healthy.”

Amanda was the Supervisor during start-up of the newly built 14M RAS system, adding it was challenging, as “we had to learn how to use the system, putting the first fish into the tanks and growing them to produce smolts. Learning and teaching staff on site about this system, grading, vaccination, smolting and shipping the fish off the site.”

“After travelling across the country and moving to Campbell River we realized that myself and Jess lived a block away from each other. We moved in together shortly after. We lived together for three years, and had a lot of adventures (traveling, camping, diving) and we remain close friends now,” she says. “Ying and I worked together at Dalrymple Hatchery, that was the first site I started at when I moved here from Nova Scotia. We were on opposite shifts but working on the same systems for three years until I went to Georgie Lake.”

Yingqiang attended some courses with Amanda and Jessica at the Nova Scotia Agricultural College (NSAC), now under the Dalhousie umbrella, “but I have to admit that I don’t recall talking to them while I was at the College. I come from a small town in southeast China, and we met in Truro, Nova Scotia. I became friends with Amanda and Jess after we joined Mowi.”

He joined Mowi in 2012 at Dalrymple Hatchery, where he was promoted to the RAS Supervisor position, joined the Broodstock team in 2019 where he became Assistant Manager at FWF, and now Interim Manager. With support from Mowi, he obtained his Master’s Degree in Aquaculture Technology Management from Memorial University of Newfoundland in 2018.

Yingqiang’s responsibilities as Freshwater Projects Manager include being familiar with WorkSafeBC construction regulations and ensure they are followed by staff and all contractors, ensuring the safety and training of projects staff and of outside contractors working on site as per Mowi Canada West policy and procedures, managing, directing, and scheduling the projects personnel, and directing and leading staff in new construction at the FW facilities.

He also works with the Procurement Department, suppliers and engineers, and Freshwater site managers, as well as with the Finance Department to track capital costs and be responsible for delivering projects on schedule and on budget.

The Freshwater Department focuses on producing high quality broodstocks, eggs and smolts in a safe, cost effective and environmentally responsible manner. Freshwater facilities, especially the land-based hatcheries, have much greater control over the rearing environments, such as temperature and water quality.

“It is much easier to provide optimum conditions for fish to grow,” he notes. “Most of the land-based facilities are indoors or in enclosed building where is considered as more preferable working environment especially during winter.”

Jessica is currently filling the manager position at FWF in Duncan, filling in for Yingqiang, who is now FW Projects Manager.

“Right now my main duties include keeping people and fish happy and healthy,” she notes. “But on top of that I am learning about a facility that has four separate year classes on-site. We have incubation (eggs) all the way up to spawning brood fish.

“Every stage needs its own lighting, temperatures, vaccination, water treatment and sorting plans. It’s a big job but I am excited for the challenge because I have done many other stages of the growing process just not all at once.”

Prior to this post, Jessica’s focus has been on the brood program, since arriving in Freshwater four years ago. The goal continues to be giving production the best genetic gains to improve gill scores, growth and reduce kudoa.

“That means we have to sort fish and hand select each fish that are used for breeding,” she explains. “Each fish is pit tagged and genetically tested so we can make the perfect match to get as many gains as possible. You have to understand the entire cycle when working with brood as you are both the end product and the start of the next generation.”

Jessica and Amanda had classes together at NSAC, but didn’t really get to know each other until they moved to BC, where they were roommates for three years while working at Mowi. “Those small connections we made in college became more important after moving to a new place without our friends or family,” she notes “At first we had different schedules, but as soon as our shifts aligned there was no stopping the adventures, fun and friendship.”

Working in the same department has been helpful for all of them.

“Our connection was already made, so there is no hesitation when you need to ask for advice, procedure or even a simple question,” she says. “Those two are so smart and can give you any information on any systems they’ve worked with. It’s astonishing, the knowledge they have learned already and what they have done with it.”

“Our education was only the start, and working at Mowi has helped our connection by giving us opportunities to work with each other, even if it’s from different sites,” she adds. “That’s how Freshwater works: Everything is connected.”