In the early afternoon on August 10th, 2022, Mowi Canada West Production Manager Mike Dobbs received several alarmed text messages from his crew—two orca whales had settled dangerously close to the shoreline in Beaver Cove. Without hesitation, Mike rushed outside to assess the situation. If the two whales were indeed straddling the shoreline, it could be an indication that they were in distress, beached, or worse. 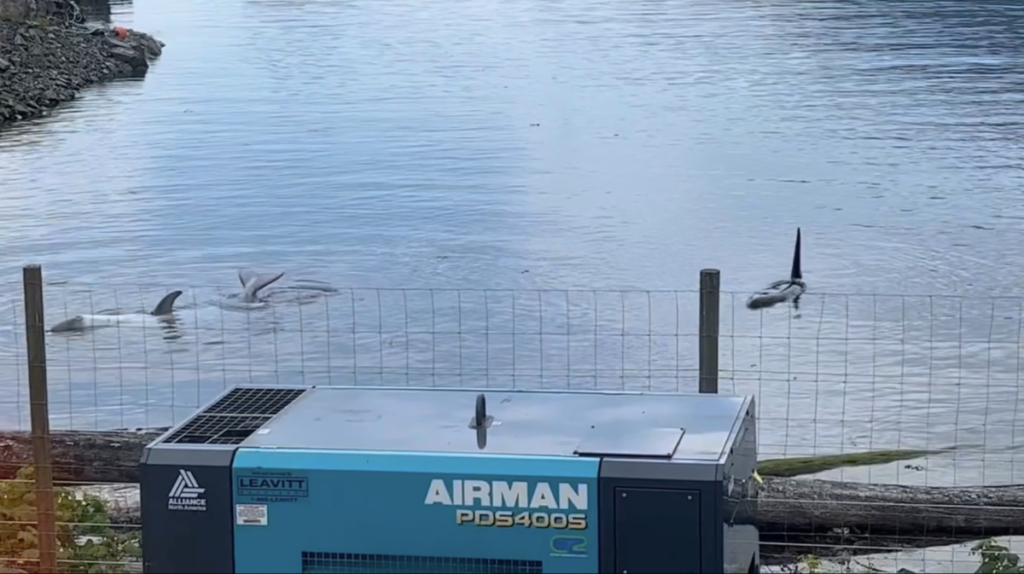 When Mike arrived on the scene, he was shocked to find that one of the orcas was almost completely white from tip to tail. It was an incredible and rare sight, but quickly overshadowed by the fact that both whales were in only a half meter of water, bellies dragging on the seafloor.

Mike and the rest of our Broughton crew weren’t sure whether the whales were from separate pods and chased each other to shore or if they were a pair, travelling together that wound up nearly beached by accident. Regardless, the situation required immediate attention. Following the Canadian Marine Mammal Regulations, Mike contacted the DFO ORR line and the Vancouver Aquarium.

Thankfully, soon after and with a pronounced slap of her tail, the black-and-white orca wriggled into deeper water, her all-white companion following suit. Wanting to minimize potential risk and avoid causing the animals additional stress, Mike shut down all boating activity in the area. For Mike, putting the safety and welfare of animals before operations came without question, and we couldn’t be prouder of his decision.

The orcas spent the next few hours exploring the bay close to our pier and docks, where they were seen swimming and jumping in unison, indicating that they were indeed a pair. After an afternoon of curious investigation, the duo finally made their exit and headed out toward Alert Bay.

“It wasn’t until later in the evening, after posting my videos to Facebook, that the gravity of what we had witnessed began to set in,” says Mike. “Needless to say, I am still incredibly excited and in disbelief of what we got to witness and am thrilled that they are doing well and that we had the chance to see this once-in-a-lifetime event.”

Local BC waters are host to hundreds of orcas, as well as humpbacks, Pacific white-sided dolphins, and even blue whales. There are strict guidelines on how to behave if you encounter whales at sea, or discover a beached whale in distress—here are some helpful resources: